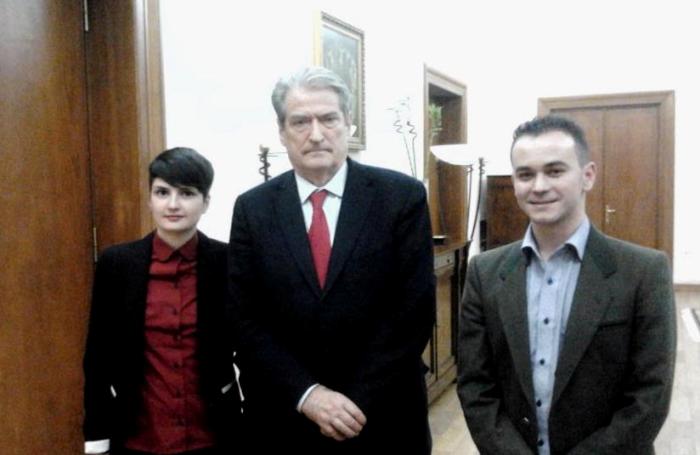 Democratic Party, welcomed today two LGBT activists, Xheni Karaj and Kristi Pinderi. He is the first Albanian PM to do so, after being the first Albanian politician to have declared himself in favor of same sex marriage, almost 4 years ago, after the elections of 2009.

Berisha, who is now seeking a third mandate as Prime Minister, expressed his full support for the LGBT movement in Albania and appreciated the activists for having given a voice to their cause. “I have carefully followed all your actions and I think that you have, so far, responded in a very good way whenever that has been necessary,” he said, adding that “it is important to believe in the cause you represent. […] To tell you the truth, [in the beginning] I have felt sorry when the debate about LGBT issues was going on and no one from the community was able to go publicly and defend the cause. So, I really appreciate that you both have appeared on television and have brought the LGBT issues to public attention,” said Berisha.

He also condemned a previous declaration of his Vice-Minister of Defense Ekrem Spahiu, namely that “What remains to be done is to beat them up with a stick. If you don't understand this, I can explain it: to beat them with a rubber stick.” Berisha said in response: “This kind of declaration is unacceptable not only for a vice minister but for everyone.” He also added that every politician in this country should have a public stance on LGBT issues and should face them without fear or complexes.

The two activists asked the Prime Minister about the recently proposed amendments of the penal code, amendments that are still in the process of approval in parliament . The amendments would include the criminalization of offending and intentional harassment towards LGBT people through digital technology. Berisha stated that he is carefully following the procedures and discussions for these amendments and he added that he is fully supporting them.

Karaj and Pinderi stressed the need to include civil society in proposing and discussing the staff members and heads of the Anti-Discrimination Commissioner institution. They emphasized that Aleanca LGBT and Pro LGBT are unsatisfied with the unsatisfactory job done up to now by this institution. It was Berisha’s conviction that the anti-discrimination law of Albania, a very progressive one, should be considered as a chance. He said that the government is willing to enforce it without conditions. “We should look forward in the future.”

Kristi Pinderi and Xheni Karaj also explained to the Prime Minister that four years ago when he had made the statement in favor of same sex marriage they didn’t yet know each other but met on the occasion of the press release. They asked Berisha if he still stands in favor of same sex marriages, or at least in favor of civil unions for same sex couples. He responded that he had recently seen on television a gay couple sharing their love story and he added: "I don’t see any wrongdoing if they want to live with each other. […] But don’t forget”, added Berisha, “that the job to be done for breaking the ice in society is a job that will for sure need its own time. But what is important is that you are on the right way.”

He suggested not to have a confrontational attitude whenever homophobic statements are made. The activists replied by stating that it's time for the LGBT movement to raise its activism to a more political level. “We want now to communicate with the main political actors in the country in order to solve our problems,” Karaj and Pinderi confirmed.

The Prime Minister guaranteed them that the government will fully support the rights of assembly of the LGBT community, having in mind the Tirana Pride 2013 announced by the three LGBT organizations to be held during September this year and the public events in the framework of IDAHO, on May 17.