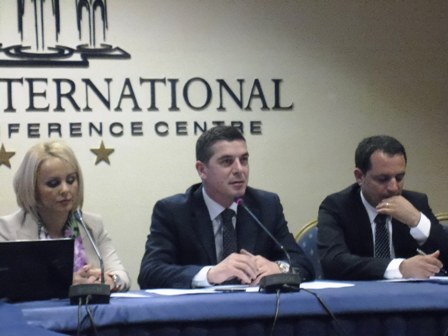 I have a short and concrete question. During the years, we have noticed that there is fear from the side of the political parties to talk concerning the rights of the LGBT community. What I was interested to know from you Mr. Oketa is: Are LGBT issues going to be discussed by your party with fear and according to some hierarchy compared to the rights of other communities, or will you consider the LGBT community as a group of interest which will be included in your political program?

Answer, Gazmend Oketa: I thank you and also Mrs. Sevim Arbana for raising this issue. We are here to present a political program and some points of it, can be taken out even on purpose in order to give space to the open discussions. I will give a very honest answer.

First of all I want to reassure you and all the participants that we do not have any kind of phobia in treating this matter, and also with the same honesty I will tell you that this matter is not our priority issue at the moment.

I will refer to Mrs. Arbana since she is a representative of the civil society. I am a political representative and my words can be commented with a political load, but I am referring to her regarding the description she made on the situation, either the economical situation, also the different problematic (editor’s note: earlier Mrs.Sevim Arbana had emphasized that is important to include in their political programs also the two marginalized groups such as the Roma community and the LGBT community).

It is a deteriorating situation where the Albanian families discuss a living, but still I assure you that we do not have any phobia discussing this matter. So we are open to suggestions, propositions and discussions but I cannot say that it is a priority of our politics or of our program at the moment, and I am still inviting you to forward your suggestions at the new Assembly where we will have our representatives to discuss over the priorities of our party or even other priorities such as the matter in question. (In this moment he makes a joke about the present Assembly, by qualifying it as a Kukuvend [WhereAssembly-is a wordplay]!)

As for above is part of the political lobbying that Aleanca LGBT and Pro LGBT are undertaking in the context of the project “Think Politically” supported by the State American Department and the US Embassy in Tirana.